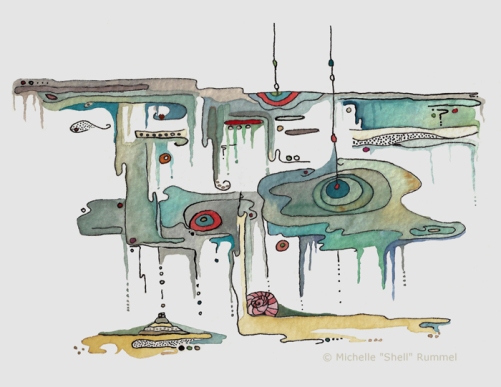 I got dizzy in the rain… (Where is a horizon line when you need one?)
So I spun then sank.
Tumbled too, on the way down… (Bruises are to be expected, right?)

Sand is soft, so I’ll stay… (Two night minimum? Please say yes…)
And now, if you’ll indulge me, I’d like to rest my head…while the world spins silently on…
(Selfish?)

My instinct is to retreat, hide, fold in upon myself, blend…

Instead…I push forward, focus and don’t second guess myself or the pen/brush in hand which seems to instinctively know the lines.

And although I know it comes from within, the feeling is one of absorbing from all that is around me.

So I pull from you…absorb your emotions and your energy….and surrender to the moment. ~

I remember feeling so vulnerable. Although my work had been in retail and wholesale markets for many years, I had not shared my private art collection art in such a directly candid way before (post, share, hold your breath, discuss;)

Time has passed and yet the process of sharing my work here like this still requires me to take a deep breath. But maybe that’s not such a bad thing.

You’re Within Me
Watercolor and Ink
©Michelle Rummel

He offered me a leaf like a hand with fingers.
I offered him a hand like a leaf with teeth.
He offered me a branch like an arm.
I offered him my arm like a branch.
He tipped his trunk towards me like a shoulder.
I tipped my shoulder to him, like a knotted trunk.
I could hear his sap quicken, beating like blood.
He could hear my blood slacken like rising sap.
I passed through him.
He passed through me.
I remained a solitary tree.
He,
A solitary man.

I love this beautiful poem written by Romanian poet, Nichita Stanescu. It speaks to me. So simple, yet vivid and powerful. Read the lines out loud…the way the words roll off the tongue is part of the charm.

To my surprise, I believe I am beginning to breathe … under here. 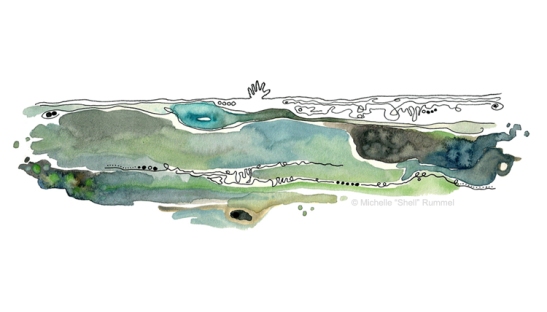 Slowly resurfacing….
Clarity comes.
A cautious comfort with the beautiful chaos that surrounds me….not so scary really, when you look it in the eye.
Reaching up, breaking through…I’m…here… and I’m barely breathing, again.
Kiss my fingertips?

If I recall correctly, this painting was among the first where I had the feeling I was, perhaps, onto something. I remember an extraordinarily rich comment thread that encouraged me to keep exploring the depths.

You know that time, pre-sleep, when the mind calms just enough so that really worthy thoughts can come through with total clarity? Well, this is one of the visions that came to me during that hazy time just before my mind finally quieted enough to allow my body to finally rest.

What Lies Beneath The Surface
Ink & watercolor
©MichelleRummel

Wanting to break free from my usual painting style, I tried to work on some new ideas that had been swirling around in my head. But, each attempt at interpreting those ideas in a fresh way left me feeling paralyzed…each idea looked strikingly like my usual work. Feeling vulnerable, distressed and frustrated, I asked my twitter friends for help, suggestions, ideas….I needed to break free but felt I didn’t know how.

So, after reflecting and writing, the feeling of being stuck began to materialize in a visual way. I tried to capture that feeling.  And so this is the beginning…

Recalling the beginning of things… which was more of a middle than a beginning, but still…

Back in 2009 when I first joined twitter, I joyfully found my way, surrounded by a thriving art community. Surely someone savvy  soon discovered Posterous.com as a place to share our artwork…word quickly spread and before long all of us had Posterous blogs. It was a wonderful time!  Such a supportive, caring, fun group of creatives all posting, sharing, commenting…not unlike the G+ community.

At the time, I was beginning the first of several transitions with my artwork and I was inspired to try some new techniques and broaden my style. Posterous became my testing ground as I began to experiment with ink and watercolor.

Time flowed and things changed. The buzz of Posterous eventually faded and recently it went dark for good after being acquired by Twittter. I felt the loss of that place mostly because my style of painting evolved so significantly there and scrolling through my Posterous blog offered a quick visual glimpse of that evolution.

So, here…I slowly begin the process of  re sharing my journey by recreating my original Posterous blog posts. I’ve posted many of these drawings and paintings before on G+, twitter and facebook, so forgive me the redundancy of posts that may look familiar to you. To my eye, it will be lovely to see them all in order and with their original words/thoughts. Of course I will post new work as it is ready to be shown,  as well surely share my photographs and music too…

And so, since every story has to begin somewhere….
©Michelle Rummel